The standard samples of CVD grown graphene on Ni covered wafers (>300 nm Ni on 4" SiO2/Si) are combinations of randomly shaped graphene layers of different thickness, from 1 to 5, with average optical thickness corresponding to ~3 layers, as shown in the optical image below for graphene transferred on glass. Carbon from decomposed hydrocarbon dissolves in Ni and precipitates out at lower temperature upon cooling. Thus the thickness of graphene depends on the thickness of Ni film and the thermal protocol during deposition. Greater thickness and texture can be produced upon request. 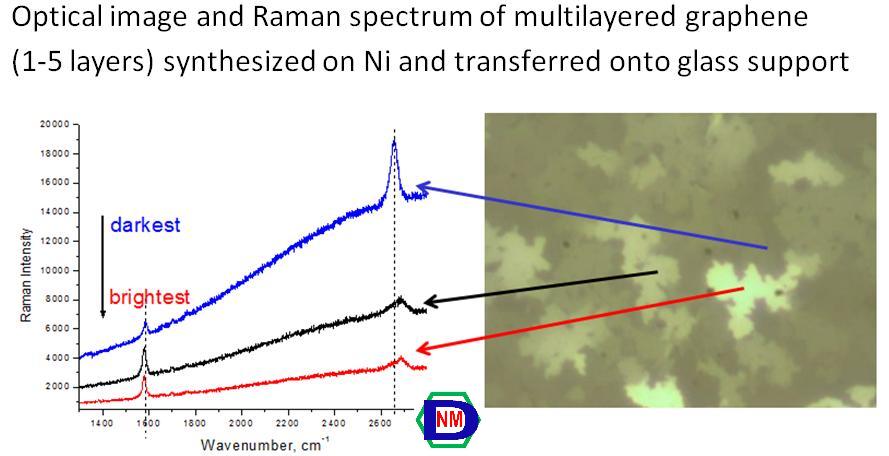 Carbon does not dissolve in Cu and thus its deposition proceeds only via surface reactions. When the amount of hydrocarbon gas is elevated, CVD of graphene on Cu folis initiates in multilayer islands, which eventually gradually reduce to single layers upon increasing coverage. The extent of double layers (and higher numbers) can be somewhat controlled but only single layer is continuous. Typical double layer coverage is greater than 50% for 0.025 mm Cu foils and > 70% for 0.125 mm Cu folis, as illustrated below. The extent of multilayer coverage can be increased upon request.